The New South Wales Government Tramways (NSWGT) operated from 1879 to 1961 and was one of the largest passenger transport undertakings in the English speaking world. This system of Sydney street railway lines grew during a 50 year expansion phase and was the product of the NSW Colonial, later State, Government. For most of its existence it was under the control of the Railway Commissioners of NSW.

The Commissioners were charged with the responsibility of running the system as a business of the State. They did not have control of line development, this was the province of the Minister for Public Works and the Parliamentary Standing Committee on Public Works. Developmental lines, particularly those in the distant suburbs, were funded by the Works budget and several lines were approved in the full knowledge that they would not prove economic in the short term. Many of the lines established during the late 19th Century ultimately proved to be highly economic, eg the Bondi Line. This corridor remains to this day one of the most lucrative lines for street based public transport operation in Sydney and is one of the few corridors to operate at a higher frequency than during the first tramway era.

The core of the system was known as the City and Suburban Lines . It radiated out from the heart of the City of Sydney on the southern side of the harbour. Another system known as the North Sydney Lines operated on the lower North Shore and several outlying isolated lines connected with the main railway system at the following stations -Parramatta, Arncliffe, Burwood, Sutherland and Camden.

The City and Suburban Lines served the developing suburbs that formed around the City core. With technological progress they evolved from steam operation to electric traction during the first decade of the 20th Century. The first full time electric service was built along George St City and Harris St Ultimo. It proved remarkably popular and soon became saturated with peak period passengers destined for the main railway station, then known as Redfern, later rebuilt and renamed as Central (1906). The degree of overcrowding was such that a loop relief line to Central was opened in 1901 along Pitt and Castlereagh Sts.

This line was to become arguably the most intensively used section of tramway in the world as it connected the busy ferry wharves at Circular Quay through the linear form of the emerging City to Central Station at the southern margin. From a tentative annual patronage of some 10m in 1903/1904, the Pitt and Castlereagh St loop grew to an astonishing 30m passengers per annum by 1931. This figure was obtained just prior to the opening of the Harbour Bridge which caused a reduction in ferry services to the Quay and consequent loss of patronage to the loop service. 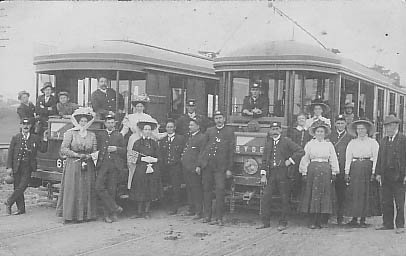 As line extensions developed into far-flung suburbs and the propensity of the population to use the trams grew, the City Lines ultimately became saturated. Saturation was notable prior to the First World War, but was not actively addressed by the State Government until the underground railway construction program of the 1920’s.

The standard Sydney tram was an 80 seat vehicle known technically as an O or P class tramcar. During peak periods many of these vehicles operated as coupled sets (“double trams” to the public) and were crewed by two conductors and one driver. The crew pattern gave rise to an approximate operating staff to seated passenger ratio of 3:160 or one staff member to 53 passengers. A better ratio than is achieved by contemporary STA bus operations where the respective figures are 1:43 passengers for a standard Sydney bus.