There are many picturesque locations around Sydney Harbour and it is perhaps no accident that South Head has received more than its fair share of postcard views over time. The topography lends itself to broad sweeping views of the Harbour and of the ocean. Here is a selection of views of this location which stress both the picturesque qualities of the site and also some historic elements.

Star Series view of the Harbour entrance and cliffs c1909

Sydney Harbour is actually a drowned river valley and this explains many of the physical features of the Harbour, its many sheltered bays and the depth of the water. South Head was a desolate location, the land rising rapidly from water level to a high point (over 350 feet/ 110m) near the location of the lighthouse, windswept, covered in low scrub and rocky outcrops and, until the development of ferry and tram services in the early part of the last Century, relatively inaccessible. Some of these qualities remain to this day.

During the Golden Era of postcards prior to WW1 “The Heads” were the first feature and also the last feature to be seen as people arrived and departed Sydney by ship. Mass airline travel was an unimaginable development then. Few visitors arrive in Sydney now by sea and the visual impact of the yellow sandstone cliffs at first light of dawn is now reserved for a handful of privileged visitors on cruise ships.

US battleship Connecticut enters Harbour in 1908. South Head in background

The commanding views from the site made it the natural place for crowds to assemble when great public events were taking place. The American Fleet visit of August 1908 was a case in point. 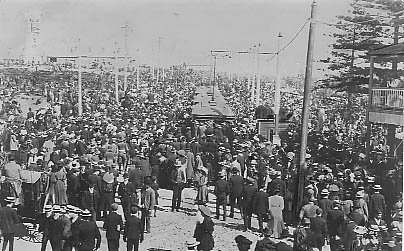 Other fleet visits by American and British ships were also witnessed by spectators at South Head. The military found the topography of South Head highly suitable for establishing coastal artillery batteries with interlocking fields of fire across the entrance to the Harbour. Remains of these batteries can be seen today. Other key man made features include the Signal Station and Lighthouse – these features too are prominent on postcard views. 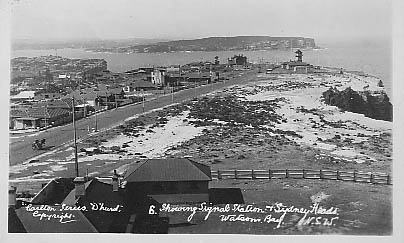 Trips to South Head and environs were once listed in the Trips Around Sydney booklet issued by the NSW Government Tourist Bureau. In 1912 for a 4d tram ride you could traverse some of Sydney’s most beautiful residential suburbs, visit the Ostrich Farm and inspect the Lighthouse (on production of orders obtainable at the Tourist Bureau ! ). The return journey could be made by ferry (from Watson’s Bay wharf) or tram. The tramway had been extended from the terminus at the Signal Station to Watson’s Bay in early 1909.

The Ostrich Farm was established by a Mr Joseph Barracluff, one time Mayor of Waverley and noted tramway lobbyist in the Eastern Suburbs. The Farm was widely advertised in its day and cards of the business are relatively common in collections today. It was located between Old South Head Rd and Military Rd, Diamond Bay.

Plucking a feather at the Ostrich farm.